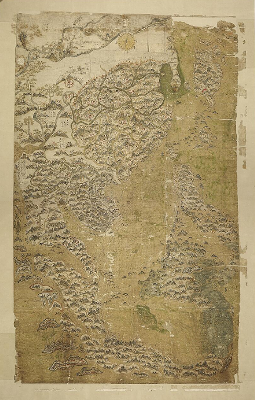 This is one of the first Chinese maps to reach Europe. It came into the Library in 1659 from the estate of the London lawyer John Selden, who must have acquired it by 1653 at the latest, as in a codicil to his will dated that year he describes the Map and an accompanying compass as having been “taken both by an englishe comander”. Perhaps Selden acquired it from an East India Company trader who took it from another European, Japanese, or Chinese vessel in the lawless conditions of the South China Sea, but the East India Company records make no mention of it.

Striking in both size and appearance, the Map was kept on permanent display in the Anatomy School and is noted in a list of the School’s contents that was prepared by its Keeper, the antiquary and diarist Thomas Hearne, in 1721. Although it was never lost sight of, its importance lay undiscovered until January 2008, when it was examined by the American scholar Robert Batchelor who noticed two features that distinguish it sharply from all Chinese maps that had been produced hitherto.

The first is that it is not just a map of China, but of the whole of East and Southeast Asia. Earlier and most later maps depicted China not only as the centre of the known world, but as occupying almost its entire area. China occupies less than one half of the area of the Selden Map, which is centred on the South China Sea, with an equal area depicting the Philippines, Borneo, Java, Sumatra, Southeast Asia, and notionally at least, India. The depiction of China itself is not the purpose of the map, and is copied from a standard printed map of the period.

The second is the presence of shipping routes with compass bearings radiating from the port of Quanzhou on the coast of Fujian Province to all the areas covered by the Map, which charted the commercial world as no map, whether European or Chinese, had done before. It is thus the earliest example of Chinese merchant cartography, unique in not being a product of the imperial bureaucracy. It indicates the extent of China’s intercourse with the rest of the world at a time when it was generally supposed to have been isolated.

A third feature of the Map became apparent during the course of the conservation work that was undertaken following its discovery. When the old backing was removed, the main sea routes, identically drawn, were found on the reverse, showing not only that this was a first draft, but that the map was being drawn by systematic geometric techniques. It is the first Chinese map to be produced in this way, and its use of voyage data obtained from a magnetic compass and distances calculated from the number of watches is a technique with no western parallel.

Unfortunately, it is not known exactly when and where the map was drawn, or who drew it and for what purpose. Recent scholarship suggests that it was probably produced in the early seventeenth century by a Chinese, as Chinese sources are used for the place-names on the Map and also the shipping routes; the compiler was probably based in Southeast Asia, as the Map’s depiction of that area was to remain the most accurate for another two centuries. It is elaborately decorated with landscapes and plants, and was almost certainly produced for reference in the house of a rich merchant rather than for use at sea.

This site uses cookies to support some content and functions, and also Google Analytics. By using this site you agree to their use. Find out more and opt out »